Based on our research since the start of the year Etsy has had half a million new sellers join the marketplace. 494,123 to be exact.

United States, United Kingdom, Canada, France, Australia, Germany, Italy, Russia, Ukraine, and Spain are the top 10 countries new sellers join from. US sellers accounted for roughly half of all new sellers, not surprising given that only 32 percent of total sales are international.

Out of all those sellers, 305,000 currently have products listed. So 61 percent of new sellers remain active.

It is impressive to see how many of the new sellers are able to have at least one sale, which suggests that discoverability on the platform is still possible. Although Etsy has received criticism that the search algorithm is scored to favor new sellers.

The only number Etsy reports is the Number of Active Sellers, which was 1.8 million last quarter. They define it as the number of sellers who sold at least one product in a year. For the last year it has been growing by 12 percent every quarter, and will likely continue to do so driven by the influx of new sellers. 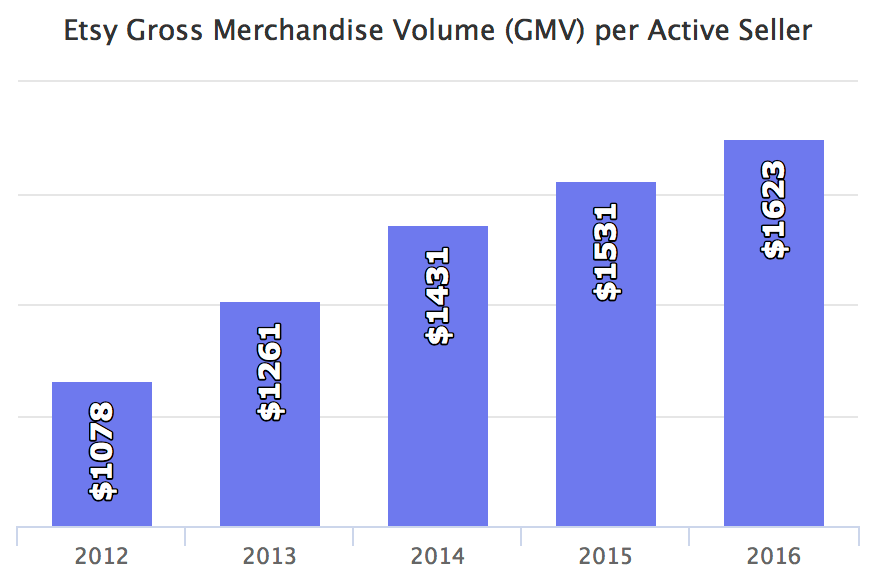 However in Etsy Is Backing Itself into a Corner we wrote about Etsy’s issues continuing sales growth, which have also meant staff layoffs, and strategy readjustment.

Khadeeja Safdar wrote in The Wall Street Journal yesterday in an article titled “Etsy’s Painful Lesson: It’s a Retailer, Not a Tech Startup”:

“The online marketplace for handmade and vintage goods, which calls itself a “sophisticated technology platform” and says it treats “code as craft,” is now under pressure to stop spending like a tech startup and start acting like a retailer.”